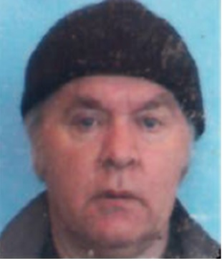 Police are continuing to appeal for any information in relation to the disappearance of George Stevenson from the Falkirk area, who went missing on Friday, 10 February, 2017, then aged 70 years old.

He was last seen in the High Station Road area of Falkirk around 11pm on Friday, 10 February, 2017 and failed to return to his home in Glenfuir Court, Falkirk, or make contact with his family or friends.

George was subsequently reported missing to police on Monday, 13 February, 2017. Since then, officers have conducted extensive inquiries to trace his whereabouts.

Both uniform and CID officers were deployed, alongside the Police Scotland Marine Unit and helicopter. A media and poster appeal was launched across all Police Scotland channels.

Inquiries to date have revealed George may have walked along Gartcows Road in Falkirk around 11.20pm on Friday, 10 February, 2017.

George is described as white, 5ft 8ins tall, with thinning hair on top and longer hair at the back and sides. He is believed to have been wearing a green tammy hat, black jacket, long cardigan, blue and white checked shirt, black jeans and khaki-coloured trainers.

Those with information regarding George’s whereabouts are asked to contact Detective Constable C820 Graeme Heeps at Police Scotland via 101.

Police Scotland works in close partnership with the Missing People Charity - the only charity in the UK which specialises in, and is dedicated to, bringing missing children and adults back together with their families.