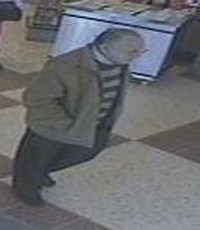 It’s thirteen years since David Findlay was last seen. David, a keen walker, left his home in Cardonald around 3pm on Monday 5 May 2008.

He never returned home and his family hasn’t seen or heard from him since.

The last confirmed sighting of David was around 6pm on Monday 5 May 2008 on Sauchiehall Street at West Nile Street.

Officers also followed up a number of unconfirmed sightings in Cumbernauld, Coatbridge, Milngavie, Kirkintilloch, Shettleston and Kilsyth. However, all attempts to locate David proved unsuccessful.

David is described as 5ft 4 ins in height and of medium build with grey receding hair and gold rimmed glasses.

"The missing person enquiry into the disappearance of David Findlay remains live and despite the passage of time, we would continue to urge anyone with any information which might be able to help our investigation to contact police on 101.

"We have been liaising with David's family to keep them updated over the years however we would ask anyone to study the images which have been released of him on CCTV, on the day he disappeared from his home in Cardonald, and contact us immediately."