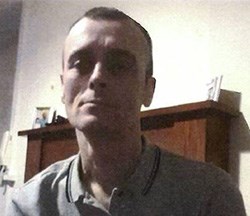 Police are continuing their attempts to trace Brian McGowan from the Plean area of Forth Valley, who went missing on Thursday, 21 September, 2017, then aged 42 years old.

Brian is described as white, 5ft 10ins tall, of slim build with short brown hair and speaks with a local accent. He has blue eyes and tattoos on his fingers. He was last known to be wearing light grey tracksuit bottoms with black stripes, a black Nike baseball cap, black and grey trainers and a black G-Star jacket.

Officers have carried out extensive inquiries to try to trace Brian but there have been no new sightings or information as to his whereabouts.

Anyone with information is asked to contact Detective Constable C820 Graeme Heeps at Police Scotland via 101, quoting reference number 2186 of 22, September, 2017.

They can be contacted via telephone on freephone 116 000 or by visiting the Missing People website.