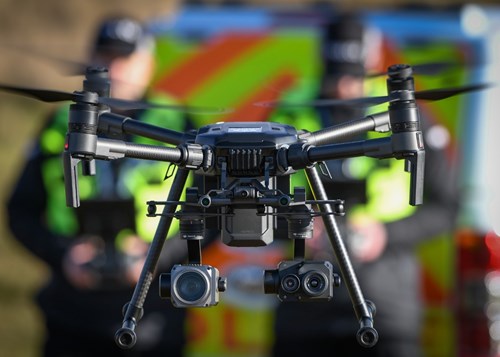 Police Scotland have Remotely Piloted Aircraft Systems (RPAS), more commonly known as drones. They are based in Inverness, Aberdeen and Glasgow as part of our Air Support Unit.

Specially trained police officers deploy the drones and have all received Civil Aviation Authority (CAA) approved training and operate according to strict criteria governed by the CAA.

What are the benefits?

Drones enhance our air support capability right across Scotland. They can be used for a variety of purposes, including searches across large areas for missing people that could otherwise take officers days to complete. They are a low cost, effective and very visible asset that can support our existing helicopter.

The RPAS are deployed to a variety of policing operations and have been used to support other emergency services and police partners.

How are police drones used?

Our drones are authorised to operate in urban and rural areas, near large gatherings such as football marches, music festival, parades or demonstrations and they can also operate at night.

In certain circumstances, usually in urban environments where there are more people, the RPAS teams will cordon off an area to operate from.  This is to ensure the safety of the public and so the operation can be carried out effectively.  The teams are always happy to answer questions and, when appropriate, demonstrate the system. 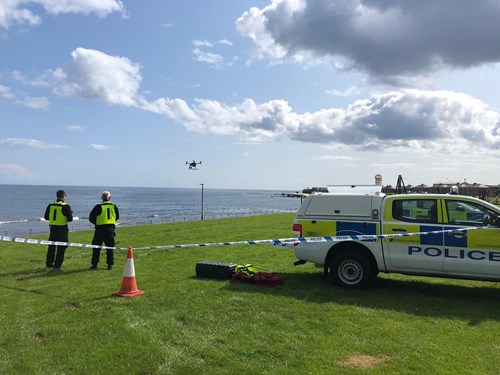 An example of a drone deployment with a cordon

The officers that operate the drones are in uniform and use a marked 4x4 police vehicle.  The drone must always be within visual line of sight of the operators, meaning they must be able to clearly see the drone at all times when it is in flight. 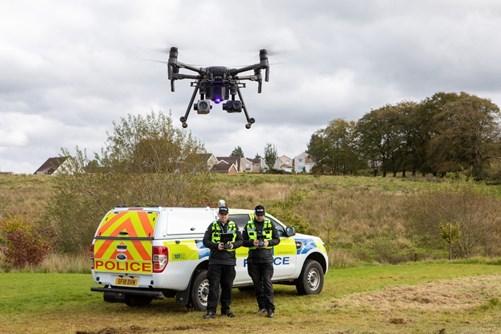 RPAS team with one of the vehicles

The 4x4 police vehicles allows them to access the more remote areas of Scotland, often required when searching for missing people.  The vehicle is equipped with lights and sirens like most other police cars and it also has a searchlight on the roof for use during night operations.  It has an on-board power supply that can be charged from the mains, via a generator or from the vehicle while it is moving.  This means that the energy created by the vehicle while driving is used to charge the batteries for the drones, making the team self-sufficient.

What type of drones are used?

The Air Support Unit currently use two types of drones.  The main operational one is the DJI M210. We have three DJI M210’s each based in Inverness, Aberdeen and Glasgow.

The images below show the benefits of having a thermal imaging system when looking for missing people. 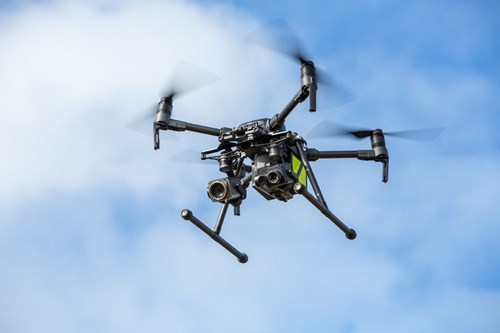 The DJI M210 RPAS in flight 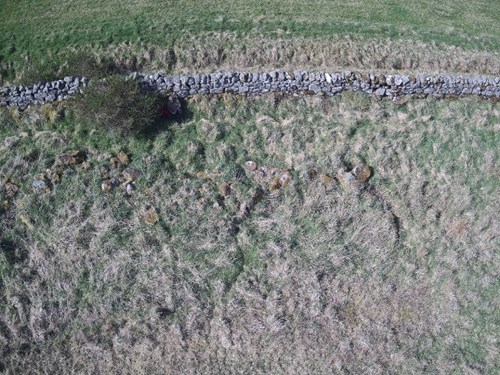 The Air Support Unit also use the DJI Phantom 4 – this is much smaller than the M210.  It’s predominantly used for training but can be used operationally in appropriate circumstances.  The DJI Phantom is not suitable for missing person searches as it does not carry a thermal image camera.  However its ease of use and quick set up makes it more suited to short duration tasks such as photographic work for crime scenes and investigations.  Police Scotland has four Phantom 4 drones, one in Inverness and Aberdeen and two in Glasgow.

Both types of drones can record video and still images.  A live feed is viewed by the police officers on the ground.  With the M210 there are always two officers deployed operationally, one controls the aircraft and the second one controls the camera.  The Phantom 4 does not have separate camera controls so the second officer acts as an observer for the one piloting the aircraft. 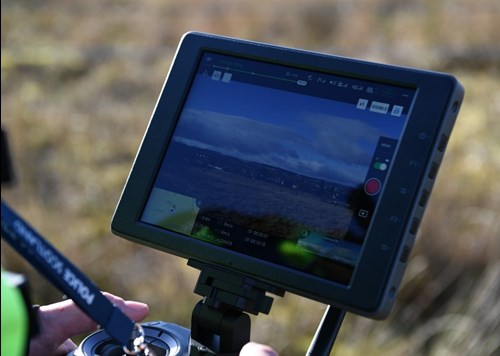 One of the controllers used by Police Scotland RPAS operators

What happens to images recorded by the drones?

Images are only recorded where it is proportionate, legal and necessary as part of a policing operation.  These can be pre-planned operations, ongoing incidents or tasks where photographs and videos are required for evidential or planning purposes.

Any aerial imagery obtained by our drones, whether that be evidential video footage or still images for criminal justice proceedings, is passed to the investigating or reporting officer involved with the incident or case.  This evidential imagery will be retained by that officer in line with Police Scotland records and retention policy and may be shared with the Crown Office and Procurator Fiscal Service (COPFS).

While conducting missing person searches our drones do not routinely record images or videos.  Only if something is found that is relevant to the enquiry will images be recorded.  It is the case that proportionally very few images or videos are recorded compared with the amount of time the drones are airborne.

The RPAS team are keen to exploit new technology in a way that makes the drones more effective and better able to deliver a quality service to the people of Scotland, to police colleagues and partners as well as other emergency services. The ongoing research work is in partnership with the University of Glasgow and University of the West of Scotland.