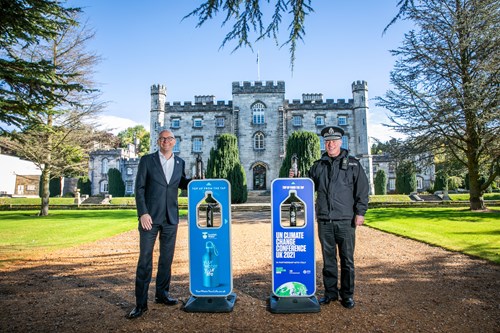 Police Scotland has partnered with Scottish Water to keep officers hydrated during deployments at COP26.

The sustainable solution will give officers access to temporary water points set up at posts around the country.

Officers will also be given a reusable, aluminium water bottle which will significantly reduce dependency on single-use plastics. Approximately 15,500 bottles will be issued to officers deployed in a range of roles during the event.
A small trial was successfully delivered during the policing response to TRNSMT where four temporary taps were installed at London Road police office.

Officers were also equipped with reusable bottles which reduced the use of single-use plastic by 550 bottles during the course of the event.

ACC Bernard Higgins, Gold Commander for COP26, said: “Supporting the welfare of our officers is key to delivering a safe and secure COP26.

“Our partnership with Scottish Water ensures we have a sustainable approach to helping our officers and staff stay hydrated whilst policing the conference.

“The addition of taps and reusable bottles minimises our impact on the environment and will reduce the use of single-use plastic, in line with the principles set out in our environmental strategy".

Brian Lironi, Director of Corporate Affairs, Scottish Water, said: "The use of refillable bottles to top up with our country's tap water has helped bring about a more sustainable approach to keeping hydrated and reducing litter, especially that associated with single use plastic. More people than ever before say they are carrying refillable bottles and our network of top up taps is helping people stay refreshed while out and about all over the country.

"We're delighted to partner with Police Scotland and contribute towards lessening the impact of single use plastic around such a significant event as COP26."

Minister for Circular Economy Lorna Slater said: “We are wholly committed to becoming a net-zero economy by 2045, and this year is a vital year for climate action with COP26 putting Scotland centre stage. I welcome this partnership between Police Scotland and Scottish Water which will help us to lead by example in reducing our dependency on single-use plastics throughout COP26 and beyond.

“Earlier this year we notified the World Trade Organisation of our plans to ban some of the most problematic single use plastic products, and we will also be introducing legislation on this topic to the Scottish Parliament later this year.

“Our 2021-22 Programme for Government outlined plans for a £70m fund to improve recycling infrastructure and an ambitious Circular Economy Bill planned within this Parliamentary session to help end our throwaway culture.”