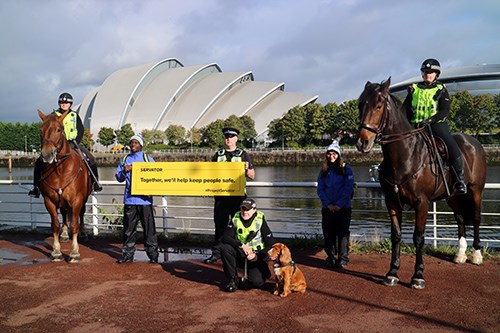 Police Scotland is launching a six week campaign to highlight the work of Project Servator - a tactic designed to disrupt a range of criminal activity, including terrorism, while providing a reassuring presence for the public.

Project Servator deployments will form an important part of the policing operation for COP26 and Police Scotland has been working with Glasgow City Council, British Transport Police (BTP) and the business community to build a network of vigilance and encourage the reporting of suspicious or unusual activity.

The highly visible and unpredictable deployments are carried out regularly across the country by police officers specially trained to identify individuals who may be planning or preparing to commit a crime.

These officers are supported by a range of specialist resources including police dogs, horses, armed officers, CCTV operators and security staff, and can use Automatic Number Plate Recognition technology.

Key to the success of Project Servator is the support of the public to be extra eyes and ears for the police, reporting anything that doesn’t seem right, to help make it even harder for criminals to succeed. A six week advertising campaign will remind people of the important part they can play.

Chief Superintendent Mark Hargreaves, Lead Planner for COP26, said: “COP26 is one of the largest policing operations the UK has seen and we plan to utilise all resources at our disposal to support the delivery of a safe and secure event.

“Project Servator has proven to be an effective tactic in helping to disrupt criminal activity and keep people safe and has been deployed successfully at major events in the past such as the Commonwealth Games and Edinburgh Festivals.

"Support from businesses, partners and members of the public is vital to its success which is why we are working with communities, British Transport Police and local authorities and councils across the country, including the host city of Glasgow. We can all play a part and I would encourage you to get involved.

“If there’s a Project Servator deployment taking place in your area, speak to our officers who will be happy to provide information and reassurance. Together, we’ll help keep COP26 and Scotland safe.

"Remember if you see something suspicious, or if something doesn’t feel right, let us know immediately. You can do this by speaking to a police officer or calling 101 or 999 in an emergency.”

Superintendent Dave Marshall, British Transport Police said: “We’ve been using Project Servator across the railway network for nearly six years now and seen first-hand the effectiveness of this tactic in deterring crime and terrorism, particularly when it comes to policing significant events.

“Project Servator will form a vital part of our policing operation for COP26, as we work closely with Police Scotland and our railway partners to ensure the safety and security of the travelling public.

“Passengers can expect to see specialist resources such as search dogs and armed police on patrol as part of these Project Servator deployments, but we need your help too. Please remember to keep an eye out for anything that doesn’t feel right, trust your instincts and report it to us using our discreet text number 61016 or 999 in an emergency.”

Denise Hamilton, head of COP26 team, Glasgow City Council, said: “We know that support from our businesses and citizens is crucial in helping us host a safe and successful summit.

"Glasgow will be busy and people can play their part by remaining vigilant while moving around the city during COP26 and reporting anything that doesn’t seem or feel right. Our COP26 volunteers who will be based at various transport hubs, hotels and venues around the city will also be keeping an eye out for suspicious activity.”

Around 10,000 officers will be deployed each day during the COP26 climate conference for what will be one of the largest policing operations undertaken in the UK.