A man has been convicted of the murder of a 42-year-old man who was shot in Ardrossan in May 2020.

James Ferguson (pictured below), 43, was convicted at the High Court in Glasgow on Monday, 25 October, 2021. He has been jailed for 22 years. 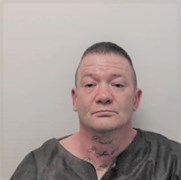 Around 4.50pm on Sunday, 24 May, 2020, Paul Cairns was found seriously injured at a house in Nithsdale Road in the town. Emergency services attended and he died at the scene a short time later.

Detective Chief Inspector John Stewart, of Police Scotland’s Specialist Crime Division, said: “Our thoughts a very much with Paul’s family and friends who at last have justice for what happened to him.

“This was a complex inquiry and Ferguson went to great lengths to cover his tracks and conceal his identity. This was a deliberate and callous attack on a man who should have been safe in his own home, who was known to his killer and was indeed his friend.”