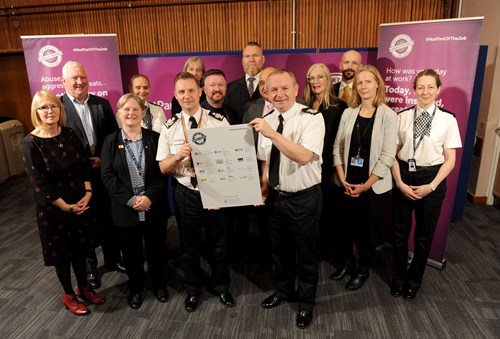 Emergency services, prosecutors and health colleagues are among those supporting a National Assault Pledge underlining a joint commitment to reduce violence and abuse against workers.

Since then, local pledges have been developed by services in Ayrshire and Dumfries and Galloway.

The National Assault Pledge was agreed by signatories at an event at Police Scotland Headquarters, Tulliallan, on Tuesday, 15 November.

Deputy Chief Constable Fiona Taylor QPM has been leading Police Scotland’s drive to reduce the impact violence and abuse has on officers and staff and introduce measures to improve their safety.

DCC Taylor said: “Being the victim of an assault can have a long lasting impact both physically and mentally. It’s not simply part of the job.

“Working in partnership with a number of key organisations highlights our collective approach and united pledge to reduce assaults at work.

“I want our officers and staff to feel supported and this partnership adds to work already ongoing in this area.”

Lord Advocate Dorothy Bain KC said: "Assaults on front line workers will not be tolerated and Scotland's prosecutors will help protect their safety through robust action.

"The Crown Office and Procurator Fiscal Service work closely with police to ensure the effective investigation and prosecution of crime.

“Any criminal behaviour that threatens public safety and the safety of front line workers will be taken very seriously."

In 2021/22, there were 7,858 common assaults against emergency workers – an increase of 12 per cent compared to the previous year. Over 7,000 of these were against police officers and staff.

Improved operational safety training, a Taser uplift programme and partnership with the Crown Office and Procurator Fiscal Service to introduce impact statements are some of the work that has been driven within Police Scotland to support officer and staff safety.