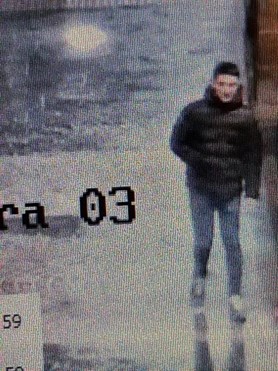 Police Scotland has released the image of a man they believe may hold information which might assist in relation to an assault which resulted in a serious injury, which occurred on Church Street, Inverness, around 12.10am on Wednesday, 1 December, 2021.

The man in the image is described as being 5ft 11 inches in height, in his early 20s, with a slim build and short dark hair, wearing a dark jacket, blue jeans and blue trainers.

Detective Constable Pamela Dugdale, of Inverness CID, said: “I would urge the male, or anyone who has information relating to the male depicted in this image, to make contact with the Police.

“Anyone with any information is asked to contact with Police at Inverness CID via 101 quoting reference number 0017 of 01 December 2021. Alternatively, call Crimestoppers on 0800 555 111 where information can be passed on anonymously.”