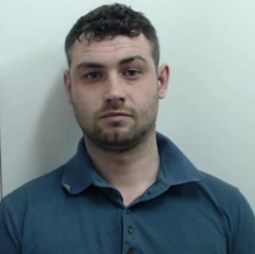 Police in Glasgow have welcomed the sentencing of Declan Clarke (30) at Glasgow Sheriff Court today, for large-scale fly-tipping offences across the city, particularly in the Drumchapel and Gartloch areas.

He originally pled guilty on Thursday, 21 April, 2022, after being accused of dumping more than 51 tonnes of tyres and household waste at a number of sites in June and October 2020.

Sergeant Nigel McDonald, from Drumchapel police station, said: “Declan Clarke was an opportunistic criminal using his illegitimate business to collect tonnes of rubbish for a fee before just dumping them across the city.

“Not only did this end up costing significant sums for the authorities to clear up, but there has been serious and long-lasting environmental damage to a number of areas where tyres or waste were heaped and set on fire.

“It is sadly highly unusual for fly-tipping cases like this to result in a custodial sentence, but it goes some way to show the seriousness of Clarke’s repeated offences. I’d like to thank our partners at Glasgow City Council and SEPA for their efforts as part of our joint-investigation into this matter.”

Stephen Egan, Glasgow City Council’s Head of Parks and Streetscene, said: “This was a shocking example of fly-tipping and we welcome the outcome of this case.

“We had to divert significant resources to clear up the waste dumped by this individual and the subsequent fire was clearly dangerous and detrimental to the local environment. As has been shown by this case, someone guilty of fly-tipping is often just the tip of the iceberg.

“The garages and other businesses that passed their waste to this individual will have known the deal being offered was too good to be true and should have made sure their waste was disposed of lawfully.

“To protect our shared environment we all have a responsibility to dispose of our waste in the proper manner at all times.”

Kath McDowall, Unit Manager at SEPA’s Serious Environmental Crime Team, said: “Waste crime has a serious and detrimental impact on our environment, communities and compliant businesses. Criminals see waste as a money-making enterprise and we work closely with partners to share information and work together to use the best powers to tackle this behaviour. We were pleased to work alongside Police Scotland in the detection and disruption of this significant waste offence, which has resulted in a sentence we hope will act as a deterrent to others.

“SEPA will continue to work closely with partners to tackle persistent non-compliance and criminal activity related to waste tyres, which have the potential to release hazardous substances into the environment if set on fire and are a blight on the landscape if not treated, recycled or disposed of properly.”