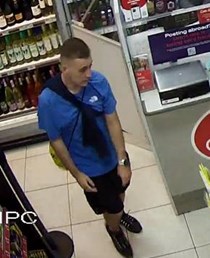 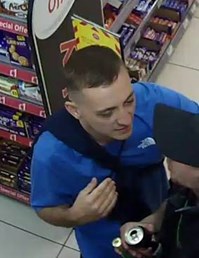 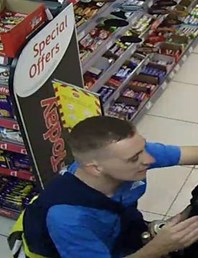 Detectives have released images of a man they believe may be able to assist them with their ongoing investigation into an assault that took place in Hope Street in Glasgow City Centre around 10.15pm on Tuesday, 7 September. As a result of this incident a man required hospital treatment.

Police believe the man shown in the image may have information that can assist with the enquiries. The man in the images is described as white, aged in his late 20s to early 30s, around 5ft 8ins in height with shaved fair hair. He can be seen to be wearing a royal blue North Face t-shirt and shorts and carrying a black drawstring bag with ‘JD’ on it.

Detectives are asking the man in the image, or anyone who recognises him or who has information regarding this incident, to contact officers through 101 quoting reference number 3748 of 7 September. Alternatively, Crimestoppers can be contacted on 0800 555 111, where anonymity can be maintained.