A man who caused the death of an Edinburgh man by dangerous driving in May 2018 has today, Friday, 26 November, 2021, been sentenced to six years in prison.

Ednilson Ceita (below), now 29, was convicted by a jury on Friday, 29 October, 2021 of two offences under the Road Traffic Act following the crash which happened shortly after midnight on Friday, 25 May, 2018 on Maybury Road in Edinburgh. He has also been disqualified from driving for nine years. 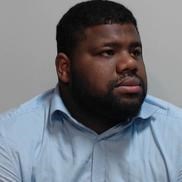 Ceita was driving a BMW X5, without a valid license or insurance, which collided with a Peugeot 206 being driven by 29-year-old Jonathan Smith. As a result of the crash, Jonathan, known as Jonny, sadly died at the scene.

A criminal investigation was launched which saw detectives from Edinburgh’s Criminal Investigations Department working alongside Road Policing Officers to understand what happened.

As a result, Ceita was arrested and charged in connection with the crash in August 2019.

Detective Chief Inspector Graham Grant said: “There were a number of complexities to this investigation but officers remained determined and committed to establish what caused this crash and cost Jonny his life.

“Ednilson Ceita failed to admit that his actions resulted in this catastrophic event. We found that he was driving at excessive speed, ultimately swerving into oncoming traffic, which led to his BMW colliding with the Peugeot being driven by Mr Smith and another vehicle.

“Jonny’s family have had to wait over three years for justice. They have been dignified and resolute throughout and I hope that today’s verdict offers them some form of comfort.

“I’d like to thank my investigation team, our colleagues in the Road Policing Unit and other elements of the organisation who contributed to the outcome, but most importantly to Jonny’s family, friends, and the wider community which he was an integral part of, for their support during our investigation.”