Re-appeal following death of man - Firth of Forth at Burntisland 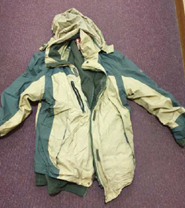 Police in Fife have released images they believe may assist in establishing the identity of a young man who was recovered from the Firth of Forth at Burntisland on Friday, 19 March, 2021.

Around 10.20am on Friday morning, officers were called to the shore near to Aberdour Road, Burntisland where the body of a man had been found in the water.

Officers believe this may be the same man who was seen acting in a concerning manner on the Forth Road Bridge in the early hours of Tuesday, 9 March, 2021.

The death is not being treated as suspicious and a full report will be forwarded to the Procurator Fiscal.

The man is described as white, between 18 and 30-years-old, 5ft 7in to 5ft 9in tall, of a thin build with short blonde to mousy brown hair.

At the time, he was wearing grey Lonsdale jogging trousers, a grey hooded Saltrock jumper and blue Adidas high-top trainers. An additional white and blue jacket was recovered on Tuesday, 9 March, 2021 on the Forth Road Bridge which officers believe may belong to the same man.

Detective Sergeant Conrad Musgrave, of Dunfermline CID, said: “Extensive enquiries have be conducted and we are appealing to members of the public for information to help trace the identity of the man involved.

“If you noticed anyone matching this description, either on the day of the incident or in the early hours of Tuesday, 9 March, please get in contact with officers.