Road users in Edinburgh are being asked to consider how safe they are as part of an initiative launched today, Monday, 28 June, by road policing officers in the city.

Police Scotland is working with a number of partners, including Lothian Buses, Road Safety Scotland, David Philp Commercials, Cycling Scotland, and Cycle Law Scotland, to encourage everyone to be more aware. 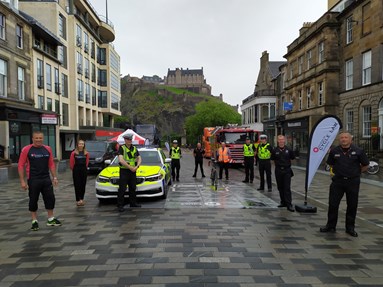 As part of ongoing operational work, it is aimed at helping all road users, including cyclists and pedestrians, and is focused on thinking about distances, blind spots and visibility.

Sergeant Jill Kirkpatrick, of Police Scotland’s Road Policing Team in Edinburgh, said: “We are encouraging everyone to think about how visible and safe they are. I believe that many people are unaware just how much the driver of a large vehicle, such as a lorry or a bus, cannot see because of blind spots. Even a small vehicle has blind spots.”

“Visibility is very important in terms of making our roads safer and I would like everyone, including pedestrians, to think about how they are seen, especially if a street is poorly lit after dark. From the cab of a lorry visibility is very different to that of a bus, car, motorbike or cycle.

“I cannot emphasise enough the need for all road users to look out for each other and give each other space. Unfortunately, when a collision happens it is often a pedestrian, cyclist or motorcyclist who come off worse.”

Sarah Boyd, Operations Director, Lothian Buses, said: “We are delighted to be working in partnership with Police Scotland and other key stakeholders to raise awareness around visibility and potential blind spots on our roads. Our driver training covers all aspects of road safety including the awareness of cyclists, pedestrians and other road users and we welcome the opportunity to be involved in this campaign.”

Jodi Gordon, Partner at specialist law firm, Cycle Law Scotland, said: "We are delighted to be supporting Police Scotland's safer roads campaign. Every day we speak to individuals who have been injured as a result of a road traffic collision, often caused by drivers who have failed to observe the pedestrian/cyclist/motorcyclist at junctions. All road users should be looking out for each other at these pinch points and so anything we can do to help educate people has got to be a positive thing."

Scottish Fire & Rescue Service Watch Commander David Morrison, said: “The Scottish Fire & Rescue Service welcomes the opportunity to support this initiative and work with partners to improve the safety of all road users in the Edinburgh area. By working to improve awareness and encouraging everyone to think about safe distances, blind spots, visibility when on or around our roads we can make our roads safer for everyone.”