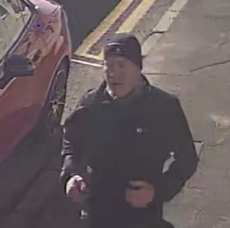 Police Scotland has released an image of a man they wish to speak to as it is believed he may be able to assist the investigation in relation to incidents which happened between 8.30am and 9.45am on Wednesday, 21 April 2021 in and around Wallacefield Road and Titchfield Road in Troon.

The man in the image is described as white, mid to late 40s, 5ft 10 inches tall and of medium build. He can be seen to be wearing a black hat, a black running jacket and black shorts.

Anyone with any information is asked to contact Police Scotland via 101, quoting reference number 0619 of 21 April, 2021, or if they wish to remain anonymous, they can call the independent charity Crimestoppers on 0800 555 111.