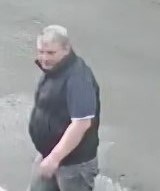 Detectives are releasing an image of a man who they believe may be able to help with enquiries in relation to a serious assault outside Target Foodland, Ardgay Street, Glasgow on Wednesday, 5 August, 2020.

Around 8.20pm on Wednesday, 5 August, 2020, two men were seriously assaulted by group of men on the footpath near to Target Foodland, Ardgay Street, Glasgow.

Detective Constable Sarah Steven at Shettleston CID Office said: “I am appealing to any members of the public who may recognise the man in the image. He is described as being white, heavy build, 40-50-years-old with grey hair. He was wearing a dark coloured body warmer, blue t-shirt and grey trousers. Anyone who can help identify this man is asked to contact the CID Office at Shettleston via telephone number 101, quoting incident number 3235 of 5 August, 2020. Alternatively, calls can be made anonymously to Crimestoppers on 0800 555 111.”