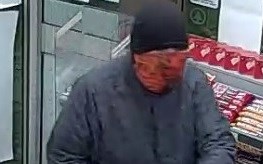 Detectives at Greater Glasgow Division have released images of two men that they wish to speak to as part of their ongoing enquiries into an incident that occurred at the Shell Garage on Edinburgh Road, Glasgow on Friday, 15 January, 2021 at around 8.58 pm.

The first man is described as white, between 18-25 years of age, 5ft 9ins in height and of slim build.  He was wearing a black top with a white line across the chest, black jogging trousers and a scarf covering his face.

The second man is described as white, aged between 25-35 years of age, around 5ft 10ins in height and of heavy build.  He was wearing navy blue Nike jogging trousers, a checked jacket, a red face mask and a dark-coloured hat.

Anyone with information is asked to contact Constable Robert Fox from the Community Investigation Unit through 101 quoting reference number 3297 of 15 January.  Alternatively, Crimestoppers can be contacted on 0800 555 111, where anonymity can be maintained.