Prime Minister Boris Johnson was briefed on the policing operation for COP26 during a visit to Police Scotland today. 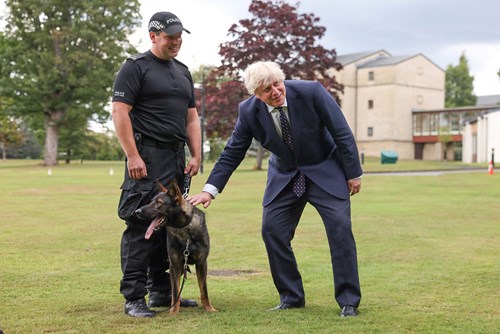 Mr Johnson met officers and staff working at Police Scotland Headquarters, Tulliallan, and at the Scottish Crime Campus, Gartcosh, and thanked them for their public service during the pandemic.

Scottish Secretary Alister Jack also participated in the visit and both met with officers and staff from Police Scotland’s newly formed International Academy, and spoke with probationary Constables.

The Prime Minister Boris Johnson said: “Police forces across the U.K. have played a crucial role in keeping us safe throughout the pandemic.

“I was delighted to visit Tulliallan and give my thanks to the officers and recruits of Police Scotland.

“I congratulate them on the launch of their International Academy and I look forward to working together to deliver the COP26 conference this November in Glasgow.”

During the visit to Police Scotland Headquarters, hosted by Chief Constable Iain Livingstone, the Prime Minister was briefed on the policing operation for the COP26 summit due to be held in Glasgow over two weeks in November.

The United Nations climate conference will require one of the largest policing operations undertaken in the history of the United Kingdom with over 100 world leaders expected to attend.

Around 10,000 officers will be deployed on some days of the event with a significant number coming from police services across the UK, via mutual aid arrangements. 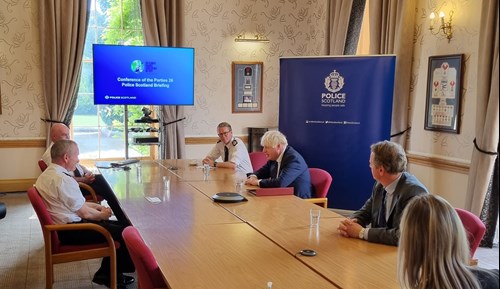 Chief Constable Livingstone said: “The officers and staff of Police Scotland have performed vital duties to support the collective efforts against coronavirus.

“They have done so in line with the values that underpin all we do – integrity, fairness, respect and commitment to upholding human rights and working with the consent of our fellow citizens to improve the lives of our communities.

“Those principles will be at the heart of our operation to police COP26, a major international event for Glasgow, Scotland and the whole of the United Kingdom. As a service committed to fundamental human rights, we will help people to make their voices heard on the crucial subject of climate change, while minimising disruption and ensuring all our communities continue to get the policing service they need and deserve.”

The Prime Minister also met with officers and staff based at the Scottish Crime Campus (SCC) at Gartcosh which houses staff from key agencies operating in Scotland, as well as state-of-the-art forensics laboratories, to combat the threat from serious crime and terrorism.

The Scottish Government funded SCC was opened in 2014.