Officers in the Highlands are appealing for information after two dogs were stolen in Gairloch. 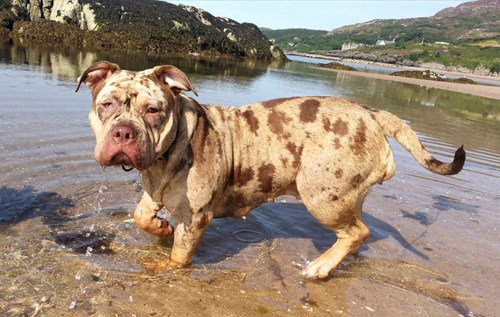 Two crossbreed American Bully style dogs were stolen – one from an address off the A832 at Gairloch and the other while it was being walked on an unnamed road close to the entrance to Gairloch Harbour.

The two dogs are both from the same property and both incidents happened a short time after each other around 7.10pm on Monday, 30 August.

It is believed that this was targeted incident, aimed at stealing these specific dogs.

Two women were assaulted at each location while the dogs were being stolen and two men involved then drove off from the area in a white Volkswagen Golf GTI.

The car was later found abandoned on Achany Place in Dingwall during the Monday evening and one of the dogs was recovered a short distance away. The other remains outstanding.

One of the men is described as being white, in his 20s with short light brown hair and wearing a black jumper and black shorts.

The other is described as being white, in his 20s with short brown hair and a slim build.

Detective Inspector Ross Hamill said: “Neither woman suffered any serious injuries during this incident, though they were both left extremely shaken.

“Our enquiries are ongoing and I would urge anyone who may be able to help to come forward. Our investigation is at an early stage but it appears this was targeted attack aimed at stealing these dogs and not a random incident.

“The vehicle is believed to have been driven on the A832 and A835 before it was abandoned in Dingwall so if you have any dashcam footage from the road on Monday evening then please get in touch.