Police Scotland to pilot carriage of Naloxone by officers

Proposals for a test of change (pilot project) for the carriage, and use, of intra-nasal spray Naloxone by Police Scotland officers have been approved by the organisation.

Following discussion at the Strategic Leadership Board the test of change projects will be delivered in three identified areas in 2021, one in each of the East, North and West local policing areas.

Naloxone is an emergency antidote to overdoses as a result of heroin (or other opioid/opiate) use, which reverses the suppression of the respiratory system. This medication, which is viewed as a first aid treatment, provides additional time for the ambulance service to arrive on scene and take over emergency medical treatment.

The test of change has been initiated in response to ongoing year-on-year increases in drug-related deaths (DRDs) in Scotland, with the country recording the highest levels of DRDs per capita globally. Figures from the National Records of Scotland indicate opiates/opioids were implicated in, or a potential contributory factor, in 86% of DRDs in 2018.

The Naloxone test of change will run for a six-month period in the following test-bed areas:

Carriage of Naloxone within the test-bed areas will be voluntary, however, all frontline officers of the rank of Police Constable, Sergeant and Inspector within these local areas will be required to undertake a training and education session. This will last approximately two hours, during which instruction on the use of intra-nasal Naloxone sprays will be provided. Representatives from third-party groups will also be in attendance.

At the conclusion of the session, officers will be asked to decide whether they wish to carry Naloxone and participate in the test of change and will then be provided with personal issue supplies of Naloxone. Officers will be permitted to carry and use Naloxone from that point, however, the official test of change will commence at the conclusion of the final training session.

It is estimated around 700 officers will be trained to potentially participate in the test of changes. The training is expected to commence in early 2021.

Assistant Chief Constable Gary Ritchie, Head of Drug Strategy for Police Scotland, said: “There has been a great deal of careful consideration given as to whether our officers should carry Naloxone as an additional piece of equipment and consultation has taken place with a range of partners through the Naloxone Delivery Steering Group.

“In doing so, it is hoped the test-bed areas will show the value of our officers carrying this treatment as an extension to the existing extensive first aid training already provided by the organisation. We are committed to being proactive in our approach to tackling problem drug use in our communities through harm reduction, as well as dispelling myths while upholding our ethos of keeping people safe in our local areas.

“This is one of the most significant test of change projects in modern policing in Scotland, and could have a significant impact on the communities we serve.

“A full evidence-based evaluation of the test of change will be produced to inform any future decision whether Naloxone is rolled out to all officers.”

The administration of intra-nasal Naloxone by police officers as part of the test of change is intended as a first aid response to preserve life, in accordance with the Right to Life in terms of Article 2 of the European Convention on Human Rights and the Human Rights Act 1998. It is also aligned to the legal duty detailed within the Police and Fire Reform (Scotland) Act 2012.

Police Scotland has instigated the test of change as a result of ongoing partnership work across a number of organisations and third sector groups as part of an holistic, sustainable approach to tackling the issues relating to problematic drug use in Scotland. 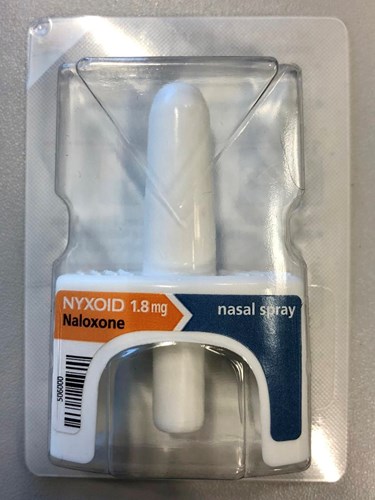