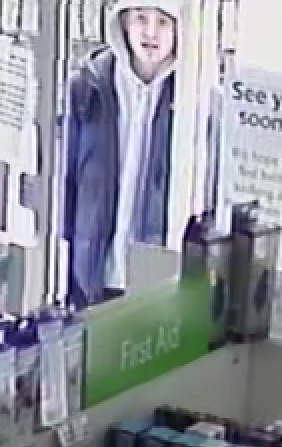 Police in Edinburgh are continuing to investigate an assault in the city. Officers have released CCTV images of a man that they believe may have information that can assist them with their enquiries.

The incident happened at a pharmacy on Duke Street around 1pm on Wednesday, 25 March, 2020.

A female victim was spat at following a disturbance and the door of the pharmacy was also damaged.

The man shown in the images is described as white, 18 to 25-years-old and of slim build.

He is shown in the images wearing a navy blue jacket, grey hoodie with the hood up, dark jogging bottoms and blue reflective trainers with black soles. He is also shown carrying a black backpack.

Constable Henderson of Leith Police Station said: "The victim was left extremely shaken by this assault.

"We would urge anyone who may be able to help our enquiries or who recognises the man seen in the CCTV images to come forward.