Appeal after assault and robbery at Sannox Gardens

Detectives in Glasgow have issued images of three men that they believe may have information that can assist with them with their enquiries into an assault and robbery that happened at Sannox Gardens at around 4.30pm on Monday 13 April, 2020. 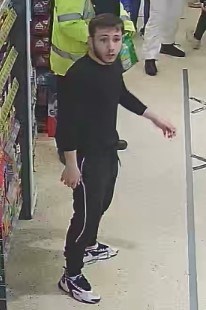 A 16 year old male was attacked during the incident. The victim required hospital treatment however was released a short time later.

Officers believe that the men shown in the images can assist with the ongoing investigation and would appeal to members of the public who recognise them to contact them.

The first man is described as 20-25 years of age, of Asian appearance, 5”9 in height, of average build, with black short hair and black stubble or a short beard. He is shown in the image wearing black tinted glasses, a black Adidas bag, a black tracksuit top and black shoes. He also has a black flower tattoo on the back of his left hand.

The second man is described as 20-23 years of age, of Asian appearance, of average build, 5”6 in height, with brown or black short hair. He is shown in the image wearing a grey tracksuit.

The third man is described as 26-28 years of age, of Asian appearance, or muscular or heavy build, 5”11 in height with shaven in hair. He is shown in the image wearing a black t-shirt with red logo and grey shorts.

Anyone with information on this incident, or who recognises these men, is asked to contact officers at the Community Investigation Unit at Helen Street Police Station, Govan via telephone number 101 quoting incident number 2607 of the 13 of April 2020 or Crimestoppers can be contacted on 0800 555 111 where anonymity can be maintained.