Official Home Office photograph of Badreddin Abadlla Adam, 28, from Sudan, who died after being shot by armed police during the incident in West George Street, Glasgow, on Friday, 26 June. 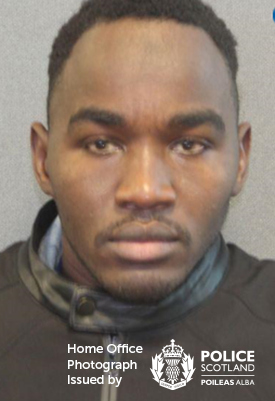 Identity of man who died in police shooting released.

The man who died after being shot by armed officers during the incident in West George Street, Glasgow, on Friday, 26 June, can now be named as Badreddin Abadlla Adam, 28, from Sudan.

The identity is based on information the deceased provided to the Home Office earlier this year. Police Scotland will continue to investigate the circumstances surrounding the incident in Glasgow.

The police discharge of firearms resulting in a fatality will also continue to be fully investigated by the Police Investigations and Review Commissioner (PIRC).

Both of these inquiries, which take place under the direction of the Lord Advocate, are ongoing and it would not be appropriate to speculate either about the events or the outcomes of these investigations.

Statement from Police Constable David Whyte, who was injured in the incident at the Park Inn Hotel, West George Street, Glasgow, on Friday, 26 June, 2020.

Constable David Whyte said: “The incident myself and colleagues faced in West George Street was extremely challenging. The scene we were confronted with is something I will never forget.

“As the first responders on scene, myself and my colleague did what all police officers are trained for to save lives.

“I would like to thank my colleagues who put themselves in harm’s way to contain this incident and assist with the vital treatment given to myself and others at the scene by other emergency services.

“Despite suffering serious injuries myself, I know that the swift actions of colleagues saved lives and prevented a far more serious incident.

“I would like to thank the medical staff at Queen Elizabeth University Hospital for their outstanding care in the hours following this incident.

“Finally, I would like to thank the public for all their kind messages of support and for the good wishes from all at Police Scotland. It means a lot and has brought both myself and my family great comfort at this difficult time.”

Constable Whyte has asked that the media please do not approach his family, friends and colleagues and that their privacy is respected at this difficult time.

Police Constable David Whyte, who was injured in the incident in West George Street, Glasgow, on Friday 26 June, is now in a stable condition in the Queen Elizabeth University Hospital.

All of them remain in hospital. One is critical but stable, and two are stable, at Glasgow Royal Infirmary. Two others are in stable conditions at the QEUH.

Police are appealing for witnesses after the incident in West George Street, Glasgow, on Friday, 26 June, 2020.

Around 12.50pm, officers responded to a report of an incident at the Park Inn Hotel.

Officers were on the scene within minutes and the incident was quickly contained.

A man was shot by armed police and died at the scene. Six men were injured and remain in hospital for treatment, including a 42-year-old police officer.

Police are appealing to anyone who may have footage of the incident to provide this via the following: https://mipp.police.uk/operation/SCOT20S17-PO1

Chief Constable Iain Livingstone said: “Terrible incidents such as we have seen today are, thankfully, very rare in Scotland. This event has understandably shocked the people of Glasgow, and indeed, the whole country.

“My thoughts and very best wishes are with those who have been injured and their families, including our colleague Constable David Whyte who was seriously injured in the course of doing his duty. I offer my personal support to all those affected.

“Officers have once again run into danger to protect their fellow citizens. Their professionalism as police officers was outstanding. I pay tribute to their bravery, selflessness and commitment to protecting the public.

“I briefed the First Minister and the Prime Minister earlier today on the circumstances and advised them both that we are not treating the attack as a terrorist incident.

“It is essential enquiries are now carried out to establish the full circumstances and all speculation must be avoided.

“Scotland is a safe place to live and work. We have cohesive communities who work with their police service to maintain our peaceful and respectful way of life.

“In the context of the current health emergency, and to respect those injured today and the people of Glasgow, I ask everyone to exercise personal responsibility. Please, do not gather in crowds this weekend.”

"Officers were on the scene within two minutes, and armed officers shortly afterwards, and the incident was quickly contained.

"A man was shot by armed police and has died. Six other men are in hospital for treatment, including a 42-year-old police officer, who is in a critical but stable condition. The officer's family is aware.

"Our thoughts are with the families of those who were injured, including our officer.

"The incident is not being treated as a terrorism and our investigation is continuing into the circumstances. There is no wider risk to the public, however the street remains closed and people should avoid the area.

"As would be the case in any police discharge of firearms involving a fatality, the Crown Office and Procurator Fiscal Service has instructed the Police Investigations and Review Commissioner to investigate."

Assistant Chief Constable Steve Johnson said: "The individual who was shot by armed police has died. Six other people are in hospital for treatment to their injuries including a police officer, who is in a critical but stable condition.

"We are continuing to deal with the incident on West George Street in Glasgow and would ask people to avoid the area.

"We would urge the public not to speculate about this incident or share unconfirmed information on social media."

"We are continuing to deal with the incident on West George Street and would ask people to avoid the area. However, I would like to reassure the public that this is a contained incident and that the wider public is not at risk. Armed police officers attended the incident and I can confirm that a male suspect was shot by an armed officer. I would like to reassure the public that at this time we are not looking for anyone else in relation to this incident.

"I can also confirm that a police officer was injured while dealing with the incident and that officer is receiving treatment in hospital."