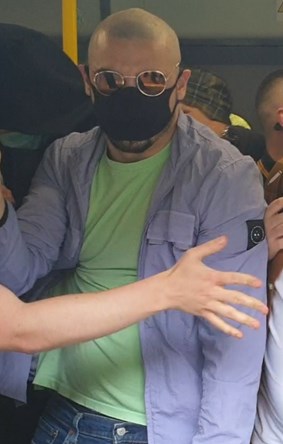 Police in Glasgow have issued images of two men they believe may have information that can assist them with their investigation into a disturbance which occurred around 4pm on Saturday 11 July 2020 at Queen’s Park Train Station.

The first male is described as being white, of a medium build, around 20-30 years old, with a shaved head and short beard. He is shown in the image wearing a blue shirt with a lime green t-shirt, a black face mask and round sunglasses.

The second male is described as being white, slim build, shaved head and around 18-25 years of age. He is shown in the image wearing a black t-shirt with a white logo on the chest, black shorts and black and white trainers.

Sergeant Gray of Greater Glasgow Violence Reduction Unit said: “We are continuing our investigation in to this incident which would have been frightening for those members of the public who were at the train station. We are eager to talk to the men in these images as we believe they may have information that could assist us. We would urge anyone who may recognise either of them, or who has any information, to get in touch as soon as possible.”

Anyone with information is asked to contact Police Scotland on 101, quoting incident number 2184 of 11 July 2020, or alternatively call Crimestoppers where information can be given anonymously on 0800 555 111.

NOTE TO EDITORS: Please note that there are other cases associated with this incident which are active for the purposes of the Contempt of Court Act 1981.