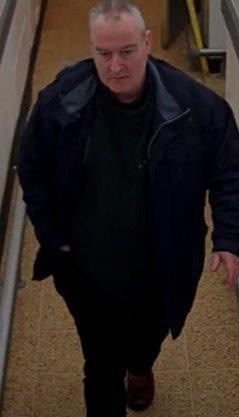 Officers are appealing for information to trace a 58-year-old man from Edinburgh who was last seen before Christmas.

A blue Volkswagen Golf GTi, registration number S274 OGB, belonging to Thomas Saunders from the Muirhouse area, in the north-west of the city was discovered, apparently abandoned, near to a forestry track in Ardgartan, Argyll and Bute. To date, despite extensive enquiries, no trace of him has been found.

He is described as being white, medium build, with green eyes and short white/greying hair. He may not be clean shaven.

The last confirmed sighting of Thomas was at the Premier Inn in Leith on Sunday, 16 December 2018, when he was seen driving from the hotel car park in the Volkswagen Golf. While it is not known what route he took, or when he traveled to Argyll and Bute, the car is believed to have been at the location it was found since Tuesday, 18 or Wednesday, 19 of December 2018.

Chief Inspector Douglas Wilson, area commander for Dunoon, is reiterating earlier appeals for anyone who has seen Thomas or has any knowledge of his current whereabouts to get in touch. He said:

"It is not unusual for Thomas not to be in touch regularly with his family or friends however, as each day passes without contact we are becoming increasingly concerned for his well -being.

"I am asking anyone who recognises his description and who may have seen him to contact Police Scotland as a matter of urgency. If you know Thomas and have any knowledge where he is or may have been since he was last seen I would urge you to come forward.

"If anyone in Arrochar or wider Argyll and Bute remembers seeing Thomas's distinctive car being driven in the area please let us know. If any drivers have dashcam footage or if there are walkers or cyclists who may have unknowingly captured Thomas on a GoPro type camera I would urge them to check their device and if there is anything that can help our enquiries, contact police. I’d also ask any hill walkers and cyclists to assist us by sharing this information and picture of Thomas on their own social media accounts.

"Extensive police enquiries have been ongoing, including searches by the force's marine unit and helicopter, and I am also grateful for the assistance of the Arrochar Mountain Rescue Team in our efforts to locate Thomas.

"Finally, I would say to Thomas himself that if he see or hears our appeals please let us know you are safe."

Anyone with information should contact Police Scotland via 101. Incident number 1270 of 28 December 2018 refers.

Project Servator is a way of policing that aims to disrupt a range of criminal activity, including, terrorism, while providing a reassuring presence for the public.